Paying Attention To How Others Respond To Your ''No''.

Have you ever said ''no'' to another adult & felt surprised, shocked, or maybe even scared by their reaction? 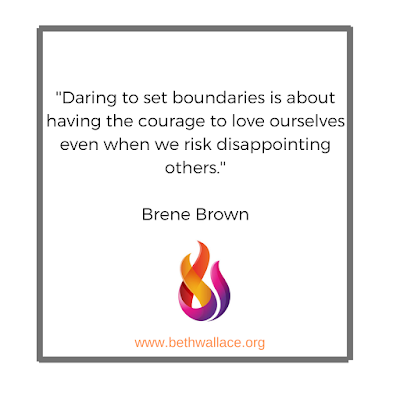 Have you ever refused another adult something they wanted from you & they then became angry, resentful, gave you 'the silent treatment', lashed out at you blaming you for their anger, or maybe they then tried to persuade, coerce or 'guilt' you into changing your mind?

Have you ever said ''no'' to a partner, maybe ''no'' to sex or to a particular kind of sex, & they then blamed you because they felt sexually unsatisfied?

How others respond when we say ''no'' to them tells us a lot about how they view us, what they expect or want from us, what 'purpose' we serve in their life, how they respect our choices, decisions & autonomy, how much they value & respect our boundaries and more.

Equally, how people respond when we make a request of them also tells us something. Often, much of how people respond in these situations is unconscious, in other words they're not consciously aware of what they're doing, how or why they're doing it, which of course is no excuse for 'bad behaviour', it is a possible reason though, & certainly not the only possible one.

Several years ago I 'lost' an old friend, we had been through a lot with each other over the course of more than a decade as close friends, including the suicide of an ex partner of his not long after they broke up, including him ending his marriage to a woman on the realisation that he was gay. We shared many adventures, several significant challenges in both our lives as well as a lot of fun times, both personally & professionally.

I asked his partner, they'd been together around 6 months at that time, for a favour. I was careful in the asking to make it clear that a ''no'' was as welcome as a ''yes'' & that he should feel under no obligation to even respond let alone say ''yes'! I appreciate that it can be difficult for people to say ''no'' to requests, especially from people they like, & so I often offer people a way that may feel easier to say ''no'', for that very reason.

He responded in a way that gave me no indication he was offended by the request, despite turning it down elegantly. However, this was apparently overstepping a mark, according to my friend I had asked too much, not only should I not have asked for this favour but the simple act of asking was enough for him to end our friendship.

Now, of course there must have been more to it for him, an unspoken brewing dissatisfaction with our friendship, for example, or maybe an unconscious & very deep fear of anything he thought might result in him losing his partner, however, this is what showed itself at the time -- his anger at me asking for what I wanted from his partner, a work related favour, the simple act of asking was abhorrent to him.

When something like this happens in a relationship, any relationship, what does it communicate? What does it tell us about expressing what we need or desire? Does it quiet us, encouraging us to keep our needs to ourselves, does it allow us to liberate ourselves from those who would keep us feeling small & silent, does it reinforce unhealthy & unconscious patterns of communication & relationship?

One of the things this situation really highlighted to me was how it feels for many people to be asked for something, it highlighted for me how difficult it is for many people to, comfortably & un-apologetically, say ''no''. Because it's so difficult to say ''no'' they can then, sometimes, resent even being asked for something because it forces them to confront their own inability or discomfort at having to consider saying, or actually say, ''no''. They will then project these emotions & discomfort out onto the person who made the request, it will appear as anger or resentment, perhaps even a ''how dare they?!'', when in actual fact what it really is is a fear of saying ''no'', or perhaps more to the point, what might result in their saying ''no''.

How easy is it for you to ask for what you need or want? How easy is it for you to lay a clear boundary down in a relationship about what is & is not acceptable? Are you afraid of the other person judging you for asking? judging you for what it is you want or need? Are you afraid that if you don't give someone what they want that it will negatively impact the relationship?

I think this is, partly, why many people feel uncomfortable both asking for & being asked for anything, simply because they are afraid to say or hear ''no'', & what that will then mean, what might happen as a result.

Perhaps they've had 'bad' experiences in the past when they've said ''no'', perhaps their boundaries have not been respected, perhaps others have done things to them they did not want, perhaps ''no'' was met with aggression or physical violence in the past, perhaps they feel afraid that if they say ''no'' the other person will no longer want them & leave the relationship, perhaps ''no'' reminds them of a time when they felt ugly, deeply unloved & rejected.


Sometimes we can't & won't know why people feel the way they do, sometimes they themselves can't & don't know, but, how someone responds to being asked for something shows us something of who they are, what that is, exactly, & what that means will vary, but it is 'something'.

How easy is it to say ''no'' to people when they ask you for something? How much guilt do you feel? do feelings of guilt cause you to do things you wish later that you hadn't done & what is the cumulative effect of this on & in you?

This was me many years ago, I would overstep or completely ignore my own boundaries & needs in order to meet the other person's needs, in order that I would then feel needed or what I thought equated with 'wanted', but mostly in order to avoid conflict. If I never said ''no'' then there would be no argument, no disagreement. I've noticed over the last decade that the more often I say ''no'' & the less guilt I feel about it (almost none now!) the more reactive others often are to my ''no''! As a survival strategy to avoid conflict not saying ''no'' works really well, but at what cost?

The cost of saying ''yes' when we really want to say ''no'' is complex & it varies according to how much & for how long we override our own ''no''. There is a cost to ourselves, potentially a very high one in sexual situations & indeed we teach others that they can get & take what they want if they just coerce, persuade, cajole or try to make others feel guilty - this does not serve them well either as it teaches them that unhealthy & abusive patterns of behaviour will get them what they want.

Sexually & in intimate relationship when we say ''yes'' but would rather say ''no'' we override our own body's physical & emotional safety mechanisms. We teach our body that it cannot trust it's own mind, the body learns that it can clearly communicate ''no'' through tension, resistance, shallow breathing, sweating, shaking, freezing, numbness, pulling away etc but that our mind ignores all of that & continues anyway & so the body will gradually shut down more & more each time it's messages are not listened to & the disconnect between body & mind grows ever more entrenched.

What this results in is, essentially, training the body to shut down, a shutting down of the body's ability to experience relaxation, rest & pleasure as well as it's openness to new experiences - safety is required for that & if there is no sense of safety there is no openness. In this situation we are, in effect, conditioning the body to 'believe' that it can't trust our mental decision making, that if it communicates a ''no'' through the nervous system then the mind will ignore that. Over time these neural pathways formed by repetitive behaviour become deeper & more ingrained until eventually it becomes very difficult, perhaps impossible, to trust, to open to pleasure, to be vulnerable & to feel safe. Then we are, potentially, into PTSD territory which requires a whole other approach to address & heal.


So, the next time you say ''no'' to someone & they react 'badly' in some way take note of that response - step back a little, if you can, notice & observe how they are responding to your ''no'', is it being respected & honoured, are they taking responsibility for their own part in it, or are they blaming you for their unhappiness, trying to change your mind or disrespecting your boundary?

Most importantly, if you feel uncomfortable saying ''no'' or asking for what you want, pay attention to your own body's messages to your mind; Is your breathing deep or shallow, fast or slow? Are your muscles tense or relaxed? Is your body temperature the same as the ambient temperature around you or have you suddenly become hot or cold? Are you shaking or is your body at ease? Are you feeling a little frozen or can you move your body freely? Can you voice what you're experiencing?

Tension, shallow and/or rapid breathing, sweating, shaking, freezing & numbness are all signs that fear is present, the body is preparing to 'fight, flight, freeze, flop or fawn' in order to protect itself. If these aren't present then that's excellent, you are at ease with the situation, fantastic!, if any of them are present it's worth inquiring into why......