Are You Abdicating Your Sexual Power? 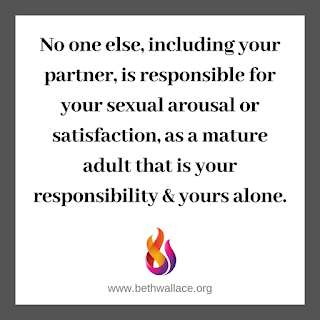 Are you abdicating your sexual power by making someone else responsible for your sexual arousal & pleasure?

It is easy to project the responsibility for sexual arousal & satisfaction onto others, & many people do it without realising they're doing it. In 'the west' we live in a world where human sexuality in many forms has become a commodity, it is something that's bought & sold, something that's used to buy & sell, it has become transactional not only in the advertising & marketing world but this has transferred to how many people have relationships & sexual encounters.

Of course this is far from new & far from limited to 'the west', in many parts of the world a woman's ''virginity'' has value, monetary value, & her worth as a human being is often leveraged entirely on her sexuality, usually in such societies a man's ''virginity'' is worthless using the same measurements - what does this teach men & women about their sexual value, power & potency? Through 'western' eyes we may view this as 'backward' or barbaric, but yet we do exactly the same, to both men & women, it just looks different.

Projecting the responsibility for our own sexual arousal & satisfaction can, however, lead not only to sexual dissatisfaction but also, in worst case scenarios, to coercive & non-consensual sexual experiences, including between long term partners & in marriages without either person in the relationship perhaps being able to identify exactly what is 'off' about the couple's sex life.


What does this look like in real terms, in a relationship or marriage?
Imagine a couple where at least one person believes, unconsciously, that every time they feel aroused it is because of something another person has done or said, the arousal never just happens, it is always as a result of someone else's action or inaction, words or silence etc. If the other person had moved differently, if their body had been more covered, if they hadn't said what they said, etc, that the person would not have gotten sexually aroused.

What's the effect of this on relationships?
In the vast majority of situations people are not aware that this is what they or their partner are doing, but perhaps there is some sort of 'icky' feeling in relation to sex, an 'icky' feeling they can't quite put their finger on, a resistance or barrier to it that they can't quite explain.
Perhaps one person feels themselves increasingly saying ''no'' to sex or feeling increasingly disinterested, this may not, of course, be the cause but it's worth considering as one. Perhaps one person feels increasingly as if they want more from their partner, sexually, than their partner is willing to ''give'', perhaps they feel increasingly rejected or abandoned, sexually. Again, this may not necessarily be the cause but it's worth considering.

Unfortunately, one person may end up feeling like they are expected to 'give' sex to the other person whenever they want it, they may feel it's not a choice they can freely make from their own desire, they may even feel that their pleasure is second in importance.

There may be pressure to ''perform'' on the part of a man & an expectation to ''give it up'' on the part of a woman, neither of which are conducive to mutually satisfying sexual experience or to intimacy in the relationship. It may result in sex feeling like a commodity or something to be transacted or bargained with rather than something that is shared between two people for mutual satisfaction, pleasure, intimacy & connection.

Eventually, over time, one person may feel like sex is a job, or something they are obliged to do, they may make their body available to their partner but in my experience 'the heart', the emotional body, becomes more closed over time, & eventually the physical body too. Even if it's not conscious, even if it's never spoken, most people are able to feel, even if they can't identify exactly what's wrong, that they are being used in some way to meet someone else's needs, eventually over time this erodes self esteem, self worth & self confidence & ultimately leads to deeply unsatisfying relationship for both people because neither person is actually getting what they want or need but yet one or both are expecting the other person to 'give' it to them, somehow.

Of course we all have needs in relationship, but what gets tricky here, in my experience, is when needs are present that we are not aware of & we project them onto other people expecting them to fulfill them without that person either consenting or being aware that that is what they're being asked for, equally, without the person with the 'need' even knowing it themselves!

What this brings to light for me is a series of questions I often ask couples on my programmes that they, usually, haven't considered before; what are you in relationship for? not necessarily this relationship but any relationship. What purpose does relationship serve for you in your life & what are you getting from it?
I encourage people to be as brutally honest with themselves & each other as possible because it's only when we know what we're looking for & can clearly communicate that to our partner, whether everyone agrees it's their 'job' to meet that need or not, is only when we have true intimacy with ourselves &, as a result, each other in relationship.


People can lose a sense of their own sexual power & potency.
What happens when we imagine that another person has so much power that they hold the responsibility for our sexual arousal? What happens when we imagine that the other person is so powerful that if we are turned on by them that we have no or not enough power within ourselves to explore & express it but that we must turn to another person to have that 'need' satisfied?

In my experience of working with both women & men in this position, those who place the responsibility for both their arousal & sexual satisfaction in the hands of another person, it is often precisely because they feel sexually disempowered that they behave in this way to begin with. A man or woman who knows their own desire, knows their own potency & is able to control that is far less likely to lay the responsibility for it at the feet of another person. However, a person who believes themselves flawed, disempowered, sexually weak, for example, because of what they have been taught to believe by society, culture or religion may be more likely to place the responsibility for their sexual power in the hands of others.

What can be done?
It's complex & the way out of this labyrinth is not the same for everyone, but there are ways out.
The way out depends on whether someone is in a relationship or not & how that relationship is, whether their partner is willing & able to engage in exploring this issue together or not. That said, the primary responsibility for dealing with it, facing it & healing it, lies in the hands of the person experiencing it, no one else, & so they need to be willing & able to confront it, with love for themselves in the process, with the support & guidance of a skilled, suitably trained & experienced professional.

It requires being honest about what we're looking for from others, what we feel our own failings are, including in relation to sex & power, being truthful about what we are hoping to 'get' from others, including the ugly flaws & painful failings that might illuminate about ourselves in the process. It's not necessarily a pleasant nor pleasurable journey, but having walked this path with a number of clients in recent years I can, hand on heart, say that it is worth it in terms of deeper relational intimacy, richer sexual satisfaction & a lighter lens through which to look at & experience life, and, not only do we affect individual lives with this work but we also change the communities & societies in which we live.