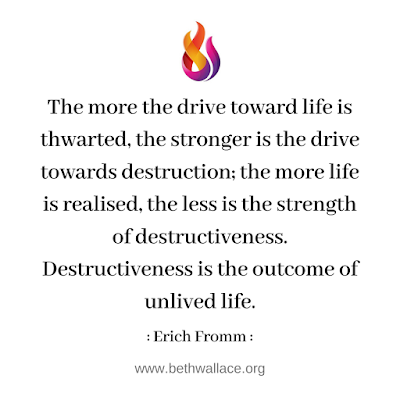 For those of us in our 40s, 50s & older who feel somewhat established in the world, for whom our lives have a reasonably solid shape & form to them, there is a Jungian concept that may resonate, that of the Unlived Life.
The Unlived Life usually shows up in mid-life, some time in our 40s or 50s as a curiosity about or a desire to depart from the expected & prior trajectory of our own life - it often feels confusing & unexpected as if it has been lurking in the unconscious mind for years, maybe even most of our life. It is the life we could, perhaps even 'should' have lived if circumstances, choices, beliefs or culture had been different. It's often, in this context, known as a ''midlife crisis'' & it's what Jung referred to as a ''confrontation with the unconscious'', in this it is a confrontation with that which we have exiled in and of ourselves, no one else. The tragedy is, of course, that often we take our resentment or anger at the Unlived Life out on others instead of taking responsibility for our own choices & decisions.
Perhaps, it would be expected that, in midlife, we would be working towards retirement, encouraging growing children to become independent & leave home, paying off the mortgage we got in our 20s or 30s, but instead of these expected life steps we take an unexpected turn! There are certain behaviours & actions that people of that age might reasonably be expected, in our own unique culture, to do - stepping into the Unlived Life is not doing that, it is doing the unexpected, perhaps even that which is unexpected & surprising to ourselves, it is doing what one maybe always wanted to do or perhaps didn't know one wanted but it suddenly emerges as undeniable in mid life, & so the Unlived Life must now be lived, or at the very least tasted, & cannot, no, it will not, be ignored.


Of course people do ignore its call, though, and in my experience, as the Erich Fromm quote above alludes to, if we are aware of & avoid our own Unlived Life it is at our peril, & perhaps the peril of others too because it will find a way to be heard, seen & felt & that is often through the destruction of that which 'it' feels caused it to be Unlived, including relationships with others & the self.

An Unlived Life can show up in relationships, especially in the form of affairs & other infidelities, distancing, a stopping of sexual intimacy, divorce, separation or perhaps a suggestion of 'open relationship' in some way to relieve the boredom or experience other things with other people. Perhaps the life that was lived until now was what was expected, if not by others then of oneself, perhaps it was the life we thought our parents or culture wanted us to live & that we 'should' live.

The Unlived Life can show up in a number of other ways including directing or desiring children, or others, to orient their lives in a particular direction because the person with the Unlived Life wishes to see their Unlived Life, well, lived out in & through others - this might look like a parent strongly directing their child towards a particular career path because the parent wanted that career path & couldn't have it, or maybe they did indeed have that career path but, perhaps on an unconscious level, they feel somewhat of a failure in that.

An Unlived Life can also look like that overenthusiastic parent pushing their less enthusiastic child at sports events, dance competitions or other activities because they, again likely on an unconscious level, desired these opportunities & experiences, maybe success too, as a child & couldn't have them & so they attempt to live their own Unlived Life through their child, children or other people's children. Equally, the Unlived Life can come out in how children are parented, in that we parent the way we wish we had been rather than how our unique children need to be parented. 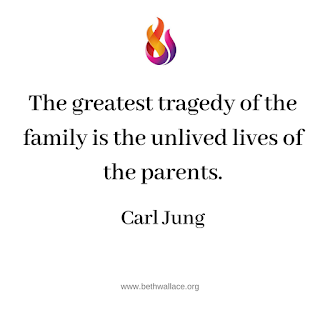 Ultimately, it's my belief we all have an Unlived Life, a life that had we had other possibilities, choices, beliefs or circumstances would have led our life to look different to how it does now, we would be living that Unlived Life instead of it living in our unconscious waiting to show itself when we least expect or want to see it.

The questions now are, how much of one's life is Unlived? How resentful or angry are we about that which is Unlived & where is that resentment & anger being directed? How much do we blame others for what has actually been our choice & how is that damaging relationships? Are we aware of our Unlived Life & can we make friends with it and, even, integrate some of it into our Lived Life so that the distance between the Lived & Unlived is lessened? Can we reduce the destruction caused by an unexpressed & unexplored Unlived Life? How can we live now in order to not have an Unlived Life in the future?

Can you feel your own Unlived Life or the potential for it? One of my specialities as a therapist is 'shadow hunting', seeking out that which is unconscious & unknown & making it conscious, shining an illuminating light on it. Of course this only happens with the cooperation & permission of the conscious mind of the client. If attempting to shine a light on your own Unlived Life feels like something you'd like to explore through work with me get in touch by emailing info@bethwallace.org.